Most Americans are finding it difficult to make ends meet. A study conducted in 2017 by the financial services company Bankrate revealed that only about six in ten Americans have enough money in the bank to cover an unexpected $500 expense, which may be why almost three in four employees say that they would like access to their earnings before their scheduled paydays.

Workers have traditionally coped with temporary financial shortfalls by using credit cards or taking out payday loans, but the information age has provided a much simpler and less expensive solution. This article will explain how ZayZoon’s earned wage access program works and how it can help employers reduce worker turnover and nurture a happier and more productive workplace.

The High Cost of Payday Loans 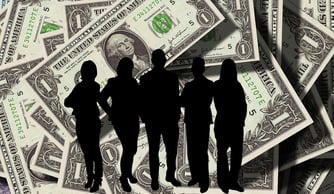 The financial system punishes people who either don’t have enough money to pay their bills or make their payments late. Running out of money before payday can leave cash-strapped workers with disconnected utilities and facing late fees, bounced check charges and overdraft penalties, which is why the payday loan industry was valued at more than $30 billion in 2020 and is expected to be worth more than $50 billion by 2030. In some states, there are more payday loan offices than McDonald’s restaurants.

Payday loans are advertised as being a convenient way to cover unexpected bills and expenses, but what they really do is saddle workers who are struggling financially with virtually inescapable debt. Here are just some of the things payday loan companies do not like to tell their customers:

Workers take out payday loans when they encounter cash flow problems, so what is needed is a way for them to access their earnings before their scheduled paydays that does not involve taking on debt. This is where ZayZoon comes in.

ZayZoon’s wages on demand program is an advance against money already earned rather than a loan against future income, so there is no money being borrowed and no interest has to be paid. Instead, workers can access their earnings using a convenient smartphone app and then transfer money to their bank accounts in real time. Workers pay only a small transaction fee, and employers pay nothing.

When employers evaluate benefits packages, they weigh the cost involved with anticipated improvements in attitude, productivity, and employee retention. This is not necessary with ZayZoon because there are no upfront costs involved; the program is virtually hands free and workers benefit greatly.

So how does ZayZoon provide access to earned wages in a matter of seconds? Here are the steps involved:

Workers who are not worrying about looming bills are usually happier and more productive, so it only makes sense for employers to do all that they can to ease financial stress in the workplace. ZayZoon provides companies with a fast and simple way to accomplish this goal. The benefits of offering ZayZoon to your employees include:

One Less Thing to Worry About

Giving your workers a way to deal with short-term financial issues without taking on debt could improve your company morale and help you to hold on to trusted team members, and Horizon Payroll Solutions and ZayZoon make offering this valuable service incredibly easy. Horizon can also handle payroll and tax compliance issues, so you have less to worry about and can spend more time thinking of ways to grow your business. If you want to learn more about our services or would like to schedule a demonstration, you can call us at (888) 434-8244 or fill out our contact form.