As you've probably heard, sexual harassment is making headlines. Men and women, from Hollywood stars to everyday people, are speaking out - and perpetrators are facing hefty consequences. No complaints at your company? Don’t breathe a sigh of relief quite yet; just because you haven’t heard about harassment at work doesn’t mean it’s not there. Make no mistake, harassment encompasses far more than dirty jokes or unwanted advances. You should know all the forms of harassing behavior, what to do about them and how to promote a workplace culture that doesn’t tolerate them.

What is Harassment, Exactly?

The Equal Employment Opportunity Commission (EEOC) defines harassment as “a form of employment discrimination that violates Title VII of the Civil Rights Act of 1964, the Age Discrimination in Employment Act of 1967, (ADEA), and the Americans with Disabilities Act of 1990, (ADA).“ Illegal harassment includes unwelcome conduct based on race, color, religion, sex (including pregnancy), national origin, age (40 or older), disability or genetic information.

Harassment can be overt, such as physical assault, or subtle. Besides the high-profile cases of sexual harassment and assault in the news lately, harassment could include (but isn’t limited to):

If an employee has to put up with the behavior to keep their job, or if it creates a hostile workplace, it may be considered harassment (of course, even if it’s not illegal it can still be inappropriate). And the victim doesn’t have to be the target of the harassing behavior – it can be anyone affected by it.

Is harassment lurking in your organization? The EEOC’s chart of risk factors has lots of food for thought, and it offers helpful responses too.

“If supervisors aren’t taught what to say from the very moment an employee reports harassment to them, they may say something unwise such as, ‘That doesn’t sound like Mark,’” says SHRM. Train supervisors appropriately before the need arises, to reduce the chance of inadvertently blaming the victim or shutting down productive communication.

HR Dive advises that you “thank the complainant for coming to you … your first concern is avoiding any inference of retaliation. Even if your investigation ultimately reveals no harassment, you could still be liable for retaliation, so tell the individual that you appreciate them bringing their concerns to you.”

Your anti-harassment policy should encourage reporting of incidents and spell out the procedure, including which staff take complaints. The EEOC says “employers should offer reporting procedures that are multi-faceted, offering a range of methods, multiple points-of-contact, and geographic and organizational diversity where possible, for an employee to report harassment.” In a working world where 70% of victims don’t report because of fear of disbelief, retaliation, blame or inaction, the more trust and communication you build, the better.

HR must start its internal investigation immediately. “As time goes by, it will become more difficult to collect evidence and get witnesses to talk. Details are forgotten. Documents disappear. Bad behavior continues,” says SHRM. Be thorough, objective and impartial. Remember that the standard of proof is a preponderance of evidence (not beyond reasonable doubt, as in criminal investigations). Gather physical evidence such as emails and documents, interview witnesses and make notes of what, when and how you handle every step of the investigation.

Accountability sends the message that harassment is not tolerated, and that your policy is not just a bunch of words. Employee discipline, if warranted, should be quick and proportionate to the offense. Support supervisors who follow your policy by rewarding them for efforts to prevent and respond to harassment (and correct them if they don’t).

The best training fails without a culture shift. "It’s about the climate," says psychologist Vicki Maglely. “When employees perceived that their company was ethical, their knowledge improved and their attitudes changed as a result of the harassment prevention training... they take it seriously because they think that the organization is taking it seriously.”

Mandatory anti-harassment training arguably raises awareness, but it’s not enough. Some kinds of [sexual harassment] training will only reinforce stereotypes and “portray men as powerful and sexually insatiable and women as vulnerable … [it has this] effect no matter how minimal the training,” according to sociologist Justine Tinkler. Another negative outcome is “identity threat reaction,” in which people think labels, like “victim” and “harasser,” don’t apply to them.

Growing in popularity, bystander training is proactive, teaching those who witness harassment to intervene or stand up for the victim. But will we really? Professor of Sport Management George B. Cunningham says, for example, “people think they will recoil and experience distress when hearing racist comments. But when they actually hear those remarks, they don’t.” Cunningham says people overestimate how upsetting it is to witness harassment, and if we don’t feel distress, we fail to act.

And then there are employee attitudes. Employment attorney Patricia Wise says “some employees are frustrated to learn that the distinction between acceptable and problematic behavior under the law can depend on how the person on the receiving end feels about the exchange.” For example, a one-off compliment differs from a slew of comments at close-range, but “the response she hears from some men, she says, is, ‘That’s ridiculous. I can never talk to a woman in the workplace again.’” Not the takeaway you want.

Before you abandon training, realize it alone won’t fix the problem. Fighting harassment is about more than avoiding legal liability with mandated training, then hoping it sticks. Common decency says that employees should feel safe and respected at work. But there’s a business case too: An employee who feels safe and trusts management is positively engaged at work and more productive.

According to The Balance, “when an organizational culture is already established, people must unlearn the old values, assumptions and behaviors before they can learn the new ones.” Set goals for respectful, appropriate behavior. Maybe you want employees to draw in coworkers passed over in meetings or to eliminate cross-talk on conference calls. Begin at the top. Executives and management normalize changes when they demonstrate the new behaviors. Their visible buy-in sets the tone for the whole company. Training still plays a role by communicating expectations and practicing new behaviors.

In the end, “you avoid harassment charges when you create the expectation in your workplace that all employees will treat each other with respect, collegiality, fairness, honesty, and integrity,” according to The Balance. It sounds simple enough, but rooting out harassment can be tough. Horizon Payroll Solutions offers HR support and training through HR On-Demand to help you navigate this tricky, and timely, topic. Contact us today for more information. 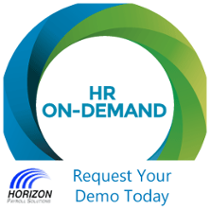